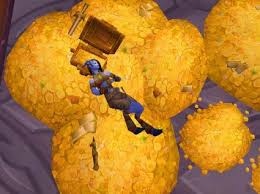 It happens to every player in every MMORPG gaming experience at some point during gameplay, even in 2014. Often, during the process of building up raid gear, you are buying gems and enchantments off of the auction house, and before you know it your character is flat broke. What are hardcore players to do? Run around with an empty gem slot in their epic gear until they can afford to fill it with a good epic gem?

Some players opt to buy gold from services outside of the World of Warcraft servers, on various websites available online, in order to make up the deficit. Some consider this especially when it comes to buying rare or expensive mounts and pets in order to complete achievements. Sometimes it is easy to be patient and farm for materials to sell on the auction house, but sometimes we just need a quick fix while leaving a handful of copper coins in the bank.

Is it safe to purchase from an out-of-game site?
Not all supplier services are created equal, and should be bartered with at your own risk. Some business sites are more shady than others, and some are more trustworthy. Some suppliers are slow to complete transactions, where some respond immediately. Before submitting a purchase outside of the global servers, a great deal of research should be done to ensure that they are trustworthy, and have the best exchange rate possible. Most of all players should be cautious about accepting gold purchase offers from gameplay “whispers” that are unsolicited.

Any time there is money changing hands, it is a good idea to check the business’s reputation and their exchange policy to ensure they are legitimate and not shady. Often, there is a “no returns” policy, so beware of that.

How does it work?
It is truly a process of several simple online business transactions. After a player picks a service to go through, they will then place an order through a website by requesting a certain amount of game currency to be delivered to a specific character on a global realm, usually in a very detailed form. The player then submits payment in real money, such as the US Dollar, via Paypal or credit card. An email is then usually sent from the business to the player with detailed instructions about how to retrieve their order, which varies from site to site. Another popular method used has the order delivered via gameplay mail, or sometimes by a trade with a character on the chosen character’s realm.

At this point, the transaction is complete and you are free to spend as you see fit! It is even possible to sell back to these services, but the exchange rate is really outrageous at times. The average in 2014 is usually around 1000G/$1 or higher. For the average player, it could take weeks to make that amount in order to exchange for cash. It certainly would not be a solid form of regular income to sell game currency for cash, but it might be nice to have real currency instead of virtual money if an account will be deactivated.

Does Blizzard allow this activity within World of Warcraft?
Technically, no, they do not. It is against policy and is explained in depth in the EULA and throughout their website. To do so puts the account at risk of deactivation for violating the user agreement. They prefer that any virtual currency exchanges stay within the game, such as through the auction house or in-game trade.

It has been suggested in several BlizzCon events and throughout the forum that they should enable their own service within the realms on the server; as of 2014 it has not been enacted yet. It is a shame, really, players would willingly pay Blizzard for the opportunity if given the chance.

If buying game currency off of a website makes you uncomfortable, there is always the gaming method of working the auction house to boost your bank. This process may take a little longer to complete, but ensures that you won’t be taken by a business with a shady reputation or risk removal from the World of Warcraft game altogether.

Summary
Article Name
Gamers Buy WoW Gold With Real Currency
Description
Buying gold from a website is a quick and easy fix to your in-game money problems, but it comes at a cost to your real bank account. Refilling the bank in-game by farming materials and selling on the auction house may be tedious and slow, but it can get you there without issues. Selling gold for cash is not a major moneymaker, but can be helpful to trade in before deactivating an account instead of letting it disappear. Investigate to find the method that works best for you and your needs, and then proceed at your own risk. Happy gaming!
Author
Epiphany Rosy